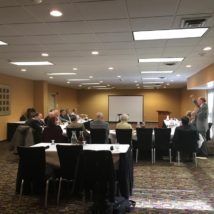 “I would like to hope someday that we’ll be able to sit down soon.” Those were the words of Riley County Commission Chair Ron Wells, who told intergovernmental leaders Monday it’s time for more discussion about a proposed county EMS headquarters. Wells  was pleased with support he heard from Manhattan City Manager Ron Fehr during the meeting regarding moving forward on the matter.
Negotiations between the county, city of Manhattan, and K-State continue and Wells is hopeful about an unidentified property being considered. The county official told the group Monday the health, safety, and welfare of Riley County citizens needs to be the most important matter here–and the EMS discussion has been going on for several years.

The intergovernmental group includes representatives from the city, county, K-State, USD 383, and Fort Riley although K-State was not represented Monday. 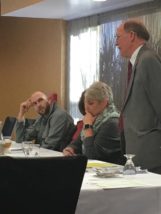 The group also talked about tax foreclosure sales, which come with some misconceptions, according to Riley County Counselor Craig Cox. Cox explained to the group the county really doesn’t have the control over the tax sale some might think it does, which is dictated by the law. The tax foreclosure sale is actually a legal case and state statutes are very particular about how and when to do things
Another misconception is that the county makes money from tax sales…but Cox explains those properties usually go for less than taxes so while the county gets some taxes collected, a lot is written off for both taxes and special assessments.

The actual auction would be in July or August, with the legal case to be filed in district court the week of January 30.