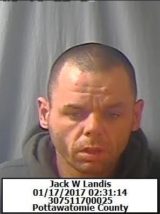 On Monday Pottawatomie County Sheriff’s deputies as well as Riley County Police officers responded to Wal-Mart in Manhattan, Pottawatomie County. The victim in this matter reported that a male individual had made a transaction at the business using what was believed to be counterfeit $100 bills.

Responding officers were able to locate the suspect near the business. The suspect, 38-year old Jack William Landis, was taken into custody.  Landis, who was unable to provide a place of residence, was taken into custody for theft by deception and making a false writing. He is currently being held at the Pottawatomie County Jail on a $15,000 bond.

The investigation into this matter continues as similar incidents have been reported in the area. Anyone who may have information related to this incident is encouraged to contact the Pottawatomie County Sheriff’s Office at 785-457-3353.