U.S. Rep. Roger Marshall issued a statement Thursday that was more aggressive than comments he made last week at a town hall in Wamego about an independent investigation into President Donald Trump’s alleged ties with Russia. 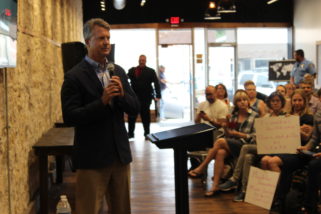 During a town hall on May 10, U.S. Rep. Roger Marshall said he supported an independent investigation into President Trump’s alleged ties with Russia. Later, Marshall said he did not believe former FBI director James Comey’s firing had anything to do with the investigation. (Staff photo by Andrew Shores)

At the town hall, Marshall said he was supportive of an independent investigation if it would be the fastest way to put the issue at bay.

“What I hate is all this distracts Congress from doing what we need to be doing. I want to get to the truth as efficiently as possible,” Marshall said during the hour-plus long meeting at the Ironclad.

During the town hall, Marshall said he was concerned about the ongoing investigation, but indicated Congress had other matters to attend to.

In a press release sent from his office to media outlets, including KMAN, Thursday, Marshall issued stronger language on an independent investigation. His statement comes after the Department of Justice appointed former FBI director Robert Mueller as special counsel of the investigation.

“Long before this witch hunt, there’s been a clear slant that has permeated our national political coverage,” Marshall said in a statement Thursday. “Half-truths and innuendo have defined the conversation. Having said that, if a special counsel is what it will take for Washington to move on to do the people’s work — so be it.

I wish the national media would balance their focus on the many good things this President and Congress are doing, such as last week’s report that after 13 long years, China has agreed to restart imports of US beef. This accomplishment from President Trump matters to Kansas – not empty accusations and absurd conjecture that have flooded the airwaves.”