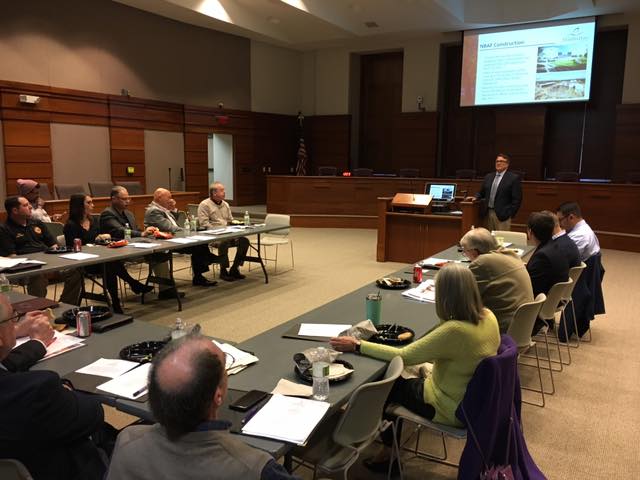 Manhattan City administrators and elected officials met with state representatives from the local area on Wednesday to discuss the city’s legislative priorities for the 2019 legislative session.
Mayor Mike Dodson and City Manager Ron Fehr along with other officials met with Representatives Sydney Carlin, Susie Swanson and Senator Tom Hawk in City Hall.
Fehr presented the city’s list of issues they hope can be addressed at the state level. Those included repealing the property tax lid — or amending the law to add exemptions for local employee benefit funds — following through with the Comprehensive State Transportation Plan and the increase of fuel tax by 5 cents to better fund KDOT, beginning to collect internet sales tax, addressing use of the “dark store theory,” exploring the expansion of tax increment finance laws to allow municipalities to capture some portion of income taxes generated by new bio-science jobs that would have gone to the state to help develop new labs, as well as fully funding the Board of Regents recommendations for Kansas State University funding.
KMAN caught up with officials following the meeting. On the topic of fully funding Kansas State University’s budget requests, Swanson says that might be tough after changes in personnel on the Higher Education Budget Committee.
“It’s going to be more of a struggle,” said Swanson, who will be succeeded by Susan Carlson in the legislature in the next session. “And even though, let’s say the committee would recommend an increase in budget, when they take it to [the Appropriations Committee]it may not fly. So there’s a limit to how influential the committee actually is.”
Representatives were also hopeful they’d be able to get something done regarding the use of the dark store theory. The theory, typically argued by big box retailers, follows that properties should be valued as though they are not in business rather than its current use. When successful, cities lose tax revenue and often have to make that up by increasing taxes on other property owners.
Hawk said he thinks it’s going to become a “huge problem,” and has been working with local officials from Manhattan and Riley County to identify a potential piece of legislation to stop its use. Other than legislation, the theory could also be stymied by changing the staffing of the Board of Tax Appeals and appointing new members who don’t adhere to the theory.
“I really would like the Governor to appoint some people to BOTA that would balance out what I think is an imbalance and I’m going to keep privately lobbying for that,” Hawk said.
Carlin said she expects to see some cities starting to go along with the theory.
“And I’m afraid that Johnson County is going to be moving that direction,” Carlin said. “I think that’s going to be a real issue for us and we’ve got some hard work to do there.”
Hawk also said he thinks the idea of allowing cities to capture a portion of income taxes generated by new bioscience jobs for use in developing new labs is a great idea that has worked in the past, but that there are still a number of questions surrounding this proposed version of the practice.
“Would we limit it to a certain industry? For us, it’s clearly biosciences because of NBAF, but would other areas of the state want to expand that to other things?” Hawk said. “And then is it affordable relative to that money not coming into the state budget?”
Carlin was largely supportive of the idea in concept as well.
“I think that’s a tool we have in the toolbox that we can use and it is for the rights kinds of reasons,” said Carlin. “And it does give companies a chance to get a good start and I’m for that.”
She also spoke on the topic of collecting sales tax on internet-based sales, saying the state needs it “badly.”
“Just a few years ago it was already a big industry, but now it’s really big,” Carlin said. “We’ve got to do something to make that work for all of us and if we did that, we’d be able to reduce our sales tax.”
Hawk also said he thinks there’s a good chance the legislature will get the Comprehensive Transportation Plan passed, especially with the recent announcement that Julie Lorenz will be the new head of the Kansas Department of Transportation.
“I was optimistic before, but you always wonder who’s going to be the face of that plan and I think she’s the perfect face of that plan since [Lorenz] really was the organizer and the facilitator and consultant that was used to develop the plan,” said Hawk. “So she knows it forwards from backwards.”
The legislature convenes on Monday, Jan. 14.