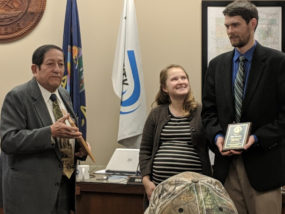 Chairman Marvin Rodriguez presented a plaque for four years of service on the commission, as well as a personal one from him and Commissioner Ron Wells. After that, Wilson presented a speech he had prepared where he thanked all the Riley County staff, commissioners, and Manhattan City commissioners as well.

Wilson said his biggest takeaway from his time on the commission was how much the county departments worked to make sure they stay within their budget to keep taxes lowered for the public.

“My biggest regret would be that I haven’t stayed on top things more, been more proactive, and taken more initiative by pushing for certain proposals and issues,” said Wilson.

The three issues he had wanted to address was the upkeep of the county fleet of vehicles, energy savings contract, and hiring a private fundraiser for the social services the county supports.

Wilson’s last meeting will be on Thursday, with incoming Commissioner John Ford swearing in on Monday.

The board showed no issue with the list and approved the appointees unanimously.