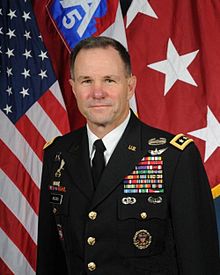 While Defense Secretary James Mattis’ replacement is to be determined, the country is curious to see what changes will come along even with just a new acting secretary. Mattis was reforming the size of the secretary of defense office and generally had a vastly different mindset while in the role of defense secretary.

Because acting defense secretary Patrick Shanahan’s background is that of business and technology rather than in military, Wiggins believes it will take more time for Shanahan to incorporate his mindset with that of the military and that priorities will indeed shift.

With the selection of Army Chief General Mark Milley as the next chairman of the Joint Chiefs of Staff, Wiggins says that he believes Milley military background will be of benefit though with a number of challenges to overcome in the near future, to include problems with recruiting personnel into the armed forces.

Wiggins says he is working to help improve employment licensing and certification practices for spouses in the military who wish to pursue their professional employment while they move from state to state with their family.

Thirty years ago, eleven percent of service members in the armed forces were married, but currently more than sixty percent of troops are married with family. More often than not, both spouses are working and arrive to a new duty station with the desire to have both spouses working.

Credentialing and licensing has been a hurdle for many spouses to jump in order to gain employment each time they change duty stations. So last year, the governor enacted the enhanced nurses’ license compact, or “eNLC,” which puts Kansas in a consortium with 26 other states in the nation. It allows nurses to have one multi-state license with the ability to practice both in their home-state and in other “eNLC” states. But nurses are not the only professionals that need this type of multi-state license.

Wiggins says that it will alleviate a lot of stress on families to ensure both spouses can work and earn a duel income to support their family. And Wiggins believes that it will surely help the state of Kansas in return.

Also discussed were some of the changes taking place as Fort Riley Soldiers are preparing for deployment and training activities across the globe.

Residents of the local area will notice both increased vehicular activity and air travel as the Combat Aviation Brigade moves their air craft from Marshall Army Air Field.

In May, the division will hold it’s Warfighter exercise at Fort Riley. The exercise is meant to test and evaluate the division commander and staff with mostly virtual tasks and scenarios that will be held on Fort Riley. Wiggins said that the Army has always been a leader in technological training and fighting standards and that it is to the servicemembers benefit to continue the trend.

Fort Leavenworth personnel will be at Fort Riley to assist with the war-fighter exercise and will contribute their technological expertise to the May evaluation as well as produce traffic in the local areas.