The City of Manhattan will take another look at the design of the planned Southeast Neighborhood Recreation Center at Douglass Park. The Manhattan City Commission unanimously voted to amend the design contract with Bruce McMillan AIA Architects at its Tuesday meeting.

The city’s original plan was for a $4 million facility that would utilise $750,000 in Community Development Block Grant funds. Administration eventually learned that CDBG money wouldn’t be able to be used on the center, leading the city to reevaluate their funding options and to re-engage the community on what they’d like to see in the center and alter the plans as needed within a $3.5 million target budget. The redesign is estimated to cost more than $56,000, which would be drawn from CDBG funds and not city tax revenue.

Desired amenities to be included in the center that were not present in the original design include programmable multi-purpose space as well as an elevated track. Bruce McMillan says that adding the track would cause them to only be able to use 30 percent of the previously created design, and that it may result in the overall size of the building being reduced to fit it into the budget.

The Douglass Center Advisory Board has expressed that they’d like the process to mirror that of the two planned recreation centers at the Middle Schools in Manhattan.

Some of the discussion centered around the fact that since they are no longer relying on CDBG funds, they don’t have the same strict restrictions on the budget for the center — though Parks and Recreation Director Eddie Eastes says they are pushing to keep the budget at the targeted $3.5 million.

Commissioner Wynn Butler wanted the budget to stay restricted, and wasn’t in favor of increasing the city’s cost for the facility.

“I didn’t have a problem when it fell through saying ‘fine, we’ll have to commit property tax to the original amount’,” says Butler. “But when you increase it, all of this is going on property tax.”

Butler was alright with taking another look at the design, but says he hasn’t been sold on approving it yet.

Commissioner Linda Morse says the commissioner created the funding issue by not putting a sales tax initiative to fund the center alongside the initiative for the two planned centers at the middle schools.

“I don’t want to do property taxes either, Wynn,” says Morse. “But […] if we can pull it off on the North Campus Corridor and some of these other things we do, I think we can find a way to at least partially fund and come up with a strategy to build this activity center.”

Mayor Mike Dodson also commented on the topic of fairness of facilities.

“I think what you’re hearing is we want to, to the degree we can, make these things equitable so that if you go to Douglass Center, if you go to either one of the middle schools it’s relatively the same,” Dodson says. “So we don’t kind of have a junior one down here.”

Commissioner Jerred McKee says the topic also has to do with equity in the treatment of neighborhoods in Manhattan.

“If it goes over our original budget, I think there’s opportunities that we can explore to potentially find that money elsewhere, I’ve even heard some potential fundraising opportunities,” says McKee. “So I would rather treat this process similar to how we’re treating the other two processes and making sure that the community feels like their feedback was heard.”

Jerred McKee
One of those alternative funding options include a sales tax initiative to offset any additional reliance to fund the center using property taxes.
The new design is expected to take 30 to 60 days to complete.
Aggieville TIF District 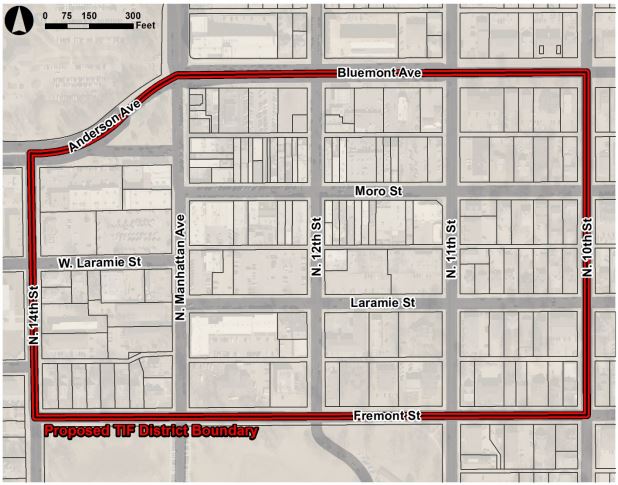 The public hearing on the establishment of the boundaries of the Aggieville tax increment finance or TIF district is set for March 19th. The Manhattan City Commission unanimously voted to set the date at their Tuesday meeting.
Audio Story – Nick McNamara
The public hearing is the next step in the process of establishing the TIF district.
Establishing a TIF district would allow the city to capture growth in property valuation — and subsequently, property taxes — over a 20 year period within a set boundary for public redevelopment purposes. The city would use the money captured by the district — estimated between $15.3 million and $20.6 million — for public improvements around Aggieville.
The boundary is proposed to extend from Bluemont to Fremont, and from 10th to 14th Street.

Following the public hearing, commissioners will vote on establishing the boundary. If approved, Riley County and Manhattan-Ogden USD 383 have 30 days to veto the district if they feel it will impact them negatively. If they have no objections, the ordinance will return to the commission for a second reading and final approval. This sets the boundaries of the district as well as the base line of valuation over which any increases in valuation will be captured.

Then the commission will have to consider one or more redevelopment plans for the area as well.