The Manhattan City Commission was largely supportive of the sole proposal they received to renovate the historic Community House in which they would sell the building with limitations and protections of its historical registry status. The Commission discussed the proposal, but held no vote at its Tuesday meeting.
The Community House was built in 1917 by Rotarians in Kansas, Missouri and Oklahoma as a refuge for soldiers of World War I and II and has been on the National and State historical registries since 2006. The current proposal would sell the building, which has fallen into disrepair, for $1 to Switchgrass Development, Inc. In return, the land would be placed under a restrictive covenant which requires the building’s historical characteristics — such as the front stairway and the fireplace along with exterior aesthetics — be maintained and the building remain on the historical registry.
The City would have authority to enforce the covenant even if the building was sold again and legally bind future owners to maintain the Community House’s historic status. The details of the agreement were worked out by a steering committee and was presented to members of the Historical Resources Board.
The developers, represented by local businessman Ben Burton at the meeting, plan to invest $2.75 million in the Community House. They will also receive a $500,000 grant from the Economic Development fund from the city once $2 million is invested. Tentative plans feature 10 office spaces, a conference room, a large multi-use space in the gym area and 6 urban-style rental lofts with high-speed WiFi and fiber internet capabilities all throughout the building. There were also questions about whether the building would have an elevator or a lift such as is already in the building. Burton says they’ll utilize the existing lift in whatever their plans are and work with their contractors to ensure it meets accessibility standards. 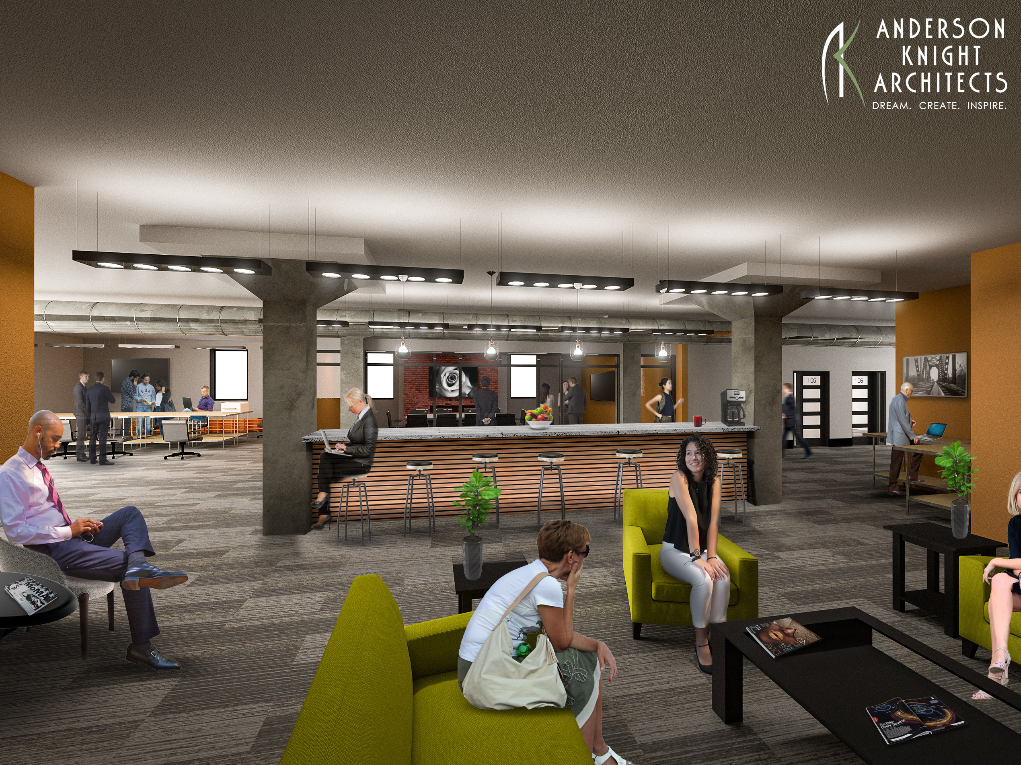 Garden level (courtesy of the City of Manhattan)

The City would also collect property tax on the building for the first time, adding $40,000 to $50,000 in revenue yearly which could be used to replenish the EcoDevo funds used for the grant if the commission chooses at a later date.
Commissioner Wynn Butler says he thinks the plans address everyone’s concerns about maintaining the Community House’s historicity and that he is excited to see the project move forward after seven years of advocating renovation. He also says he was concerned about the grant at first glance, but likes the option to refund the money over the years.
“I’ve always felt like we should take some of economic development money and invest it in local business,” says Butler. “And this is a way it’s invested and then will be regenerated and can be invested again in somebody else’s project 4 or 5 years from now.” 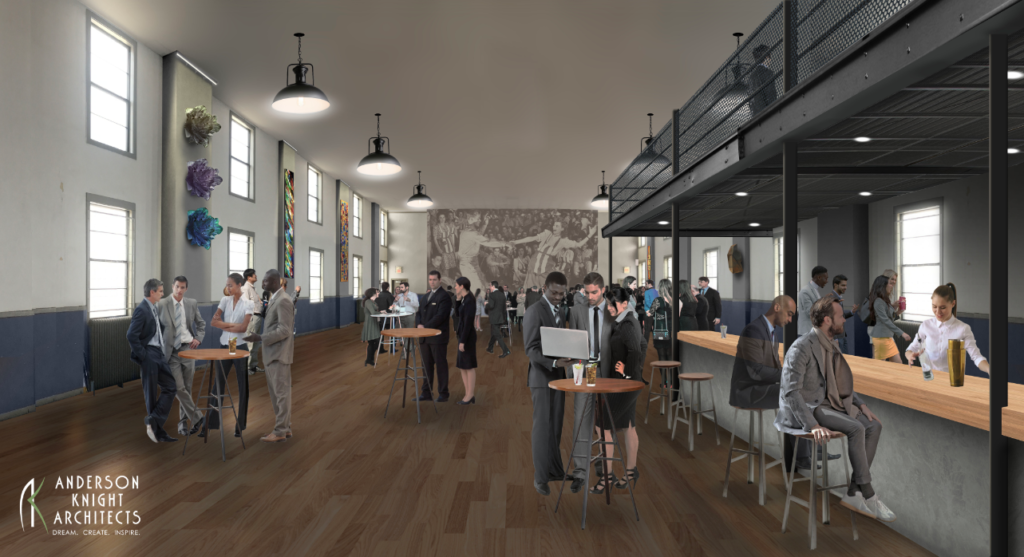 Gymnasium area (courtesy of the City of Manhattan)

Commissioner Jerred McKee draws parallels to what has been going on in Downtown Kansas City with old industrial buildings.
“They’re finding ways to attract remote workers and those workers tend to want to live in urban environments much like this one and have spaces much like this one.”
Burton says they plan to make a point to use local contractors and materials as much as possible, saying that the community should be involved in the renovation of the Community House. Switchgrass has also communicated with the State Historic Preservation Offices and Downtown Manhattan Inc. about their plans in addition to the HRB and steering committee and implemented some of the feedback they received into their early design.  One addition they added based on that is a storyboard or plaque to tell people about the history of the building.
“And that’s a feature we would want to add,” Burton says. “We would want to work with the Riley County Museum, the Rotarians, anyone who has a sense of history for that building.”
He also says they plan to make the historical features focal points of the design as well, which he showed in their composite images.
Linda Glasgow, archivist and librarian for the Riley County Historical Museum, spoke during public comment to ask the commission to look back at the comments made during the HRB presentation as not all were necessarily positive and questioned whether the original builders would have envisioned its use changing in this way. She also said that the commission should find out what the Rotarians think of the plans. Additionally, the developers have no plans to create new parking accommodations, instead raising the possibility of using city lots or purple zone parking passes for residents. Glasgow says that needs to be addressed
“That becomes very important when it’s you that’s carrying the groceries.”
Commissioner Linda Morse says she thinks the plans fit the city’s vision for a more dense downtown area and also opposes reserving public parking lots for use by residents at the Community House.
“This is a public parking lot and we already have assigned 6 or so spaces for government officials and I think we have to leave it open,” Morse says. “I want to make sure our merchants downtown have parking places also.” 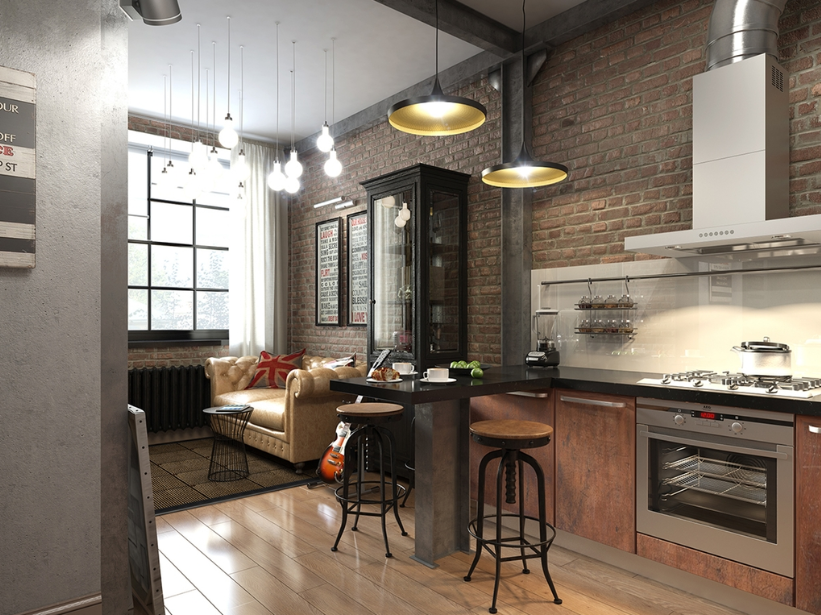 Loft composite (courtesy of the City of Manhattan)

Mayor Pro Tempore Usha Reddi says she thinks the design is a great vision for Downtown, adding that there are multiple businesses that deal with parking deficits and that potential residents will have to take that into account. She also says other communities are moving toward this style of
“It makes it seem fun — kind of work — but also it has that cool feeling to be in Manhattan and that’s what we want,” says Reddi. “We want people who are young prof to live there and enjoy the feel of it and more people are working remote so this gives them that option as well.”
Mayor Mike Dodson, a Rotarian, says the city has been looking for a use for the Community House for a while and was supportive of the plans presented.
“Sometimes when you build a structure, you simply out grow it or it doesn’t any longer suit the purpose for which it was originally built,” Dodson says. “I think this is the case here.”
Dodson also recommended that the developers consider doing some aesthetic upgrades — or at least cleaning — to the exterior without compromising the historical characteristics.
The City Commission will have oversight throughout the process. Before the sale can close the developers will need to have preliminary designs completed, commit to invest more than $2 million on the renovations (current plans show a $2.75 million plan), and identify the use of the building (currently planned as mixed use office and residential) — all of which need to be approved by the Commission. Following that, the developers must apply for and receive their building permit and be approved for historic state and federal tax credits. Under the agreement, they must have all of this completed and close the sale no later than May 2020.
Following the sale, the final design must be completed within 90 days and submitted to the City Commission for approval and the developer must agree to spend at least 90 percent of their estimated cost in the project. They would be required to complete the project within 180 days.
The developer hopes to have construction complete in late 2020 if everything is approved at a later date.