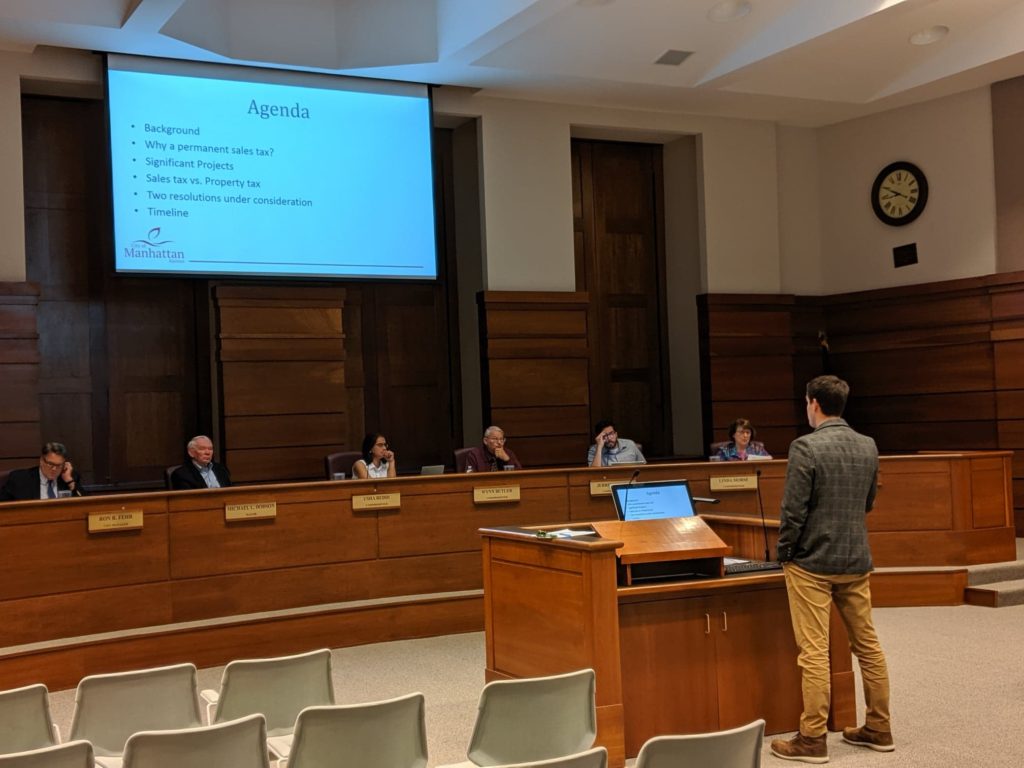 Manhattan residents will vote in November whether to increase sales tax by 0.3 percent. The Manhattan City Commission voted unanimously to send the question to the public at its Tuesday meeting.

Such an increase would bring Manhattan’s sales tax rate from 8.95 percent to 9.25 percent, sending the city into the top 10 of 25 total first class cities in terms of sales tax. Those areas with self-imposed sales tax increases such as transportation development districts or community improvement districts would have varying higher rates.
Much of the discussion at the meeting centered on funding projects amid slowing revenue growth for the city. There are multiple costly jobs in the works for the coming years. Some are already committed to, such as raising the city’s levee to better defend against flooding — partially funded by the federal government, Manhattan’s share of the cost is $17 million with interest. Others, administration says, will be necessary relatively soon such as the Airport runway expansion — the city’s cost on which would be $5.9 million with interest.
Also in the works are Aggieville improvements including a parking garage, North Campus Corridor work around Kansas State University and the National Bio and Agro Defense Facility, the Joint Maintenance Facility and the Douglass Recreation Center. Altogether, these major projects are estimated to cost $190 million before interest.
The assortment of projects would be bonded and paid off over the next 30 years. Manhattan has a funding gap of about $50 million — $90 million including interest — they’d need to make up to be able to afford all of them. A permanent sales tax of 0.3 percent would raise $3.3 million per year, more if sales tax revenues improve and less if they fall. Overall, over the course of 30 years it would bring in $99 million which covers all bond and interest costs for all projects listed with some wiggle room.
An equivalent amount of revenue via property tax would require a 6 mill increase. City administration did a break-down of the anticipated effect on residents under both scenarios. Assuming a resident spends the national average of 30 percent of their revenue on taxable goods and services, someone who takes home $35,000 per year would see an annual increase of $32 in taxes with a 0.3 percent sales tax increase. Based on the average home value in Manhattan, an owner of a home worth $200,000 would see an annual increase of $138 per year with a 6 mill increase.
The question reads as follows:

Shall the City of Manhattan, Kansas be authorized to impose an additional three tenths of one
percent (0.3%) general retailers’ sales tax, thereby increasing the general sales tax currently in
effect, on all applicable retail sales occurring within the City, pursuant to the authority of K.S.A.
12-187 et seq., to be used for all lawful expenditures of the City and intended to reduce the impact
on the ad valorem property tax burden on City taxpayers with collection of such tax beginning on
April 1, 2020, or as soon as provided by law?

The sales tax would be permanent, though future commissions would have the authority to rescind it via ordinance. Administration says special sales taxes sunset after 10 years, and that the revenue would need to be generated for the entire 30 year span of the projects in order to not require increases elsewhere in the budget. Another option always on the table is to decide to postpone or scrap certain projects altogether.
Commissioners were largely supportive of sending the question to the public, though multiple had concerns about other revenue streams that would help pay for projects as well. Mayor Pro Tempore Usha Reddi notes that the share for North Campus improvements is assuming they receive STAR bonds from the state, for example.
Manhattan lawyer Joe Knopp spoke during public comment, asking the commission to reconsider the Douglass Recreation Center, saying three rec. centers is extravagant, and to spread the others out considering the current revenue situation. He says in a few years that perhaps NBAF money could help and that many will vote for the tax in fear of property tax increasing as an alternative.
“Hold the line on spending, I don’t think we have a revenue problem as much as we have a spending problem,” Knopp says. “I would hope that you could help us figure that spending problem out and focus on property tax and operating city government and not just on building more projects.”
Though much of the discussion focused on projects, Commissioner Jerred McKee cautioned about centering the issue around them. McKee says that until new revenue streams come in or something changes in how they operate, personnel costs will continue to drive up the mill levy as they are the chief expense of the general fund. He adds it’s not just a choice of what projects people want
“Fundamentally what are the city services that you want to be offered?” asks McKee. “Because in many sections in our city we are already understaffed in departments, so I don’t know how we continue to reduce that.”
Reddi says they and administration need to be adamant in educating the public that though the intent is to reduce these projects’ property tax impacts, it won’t necessarily reduce property tax outright.
“As a layperson, if I vote on this and when I get a survey — that’s all I’m going to see,” says Reddi. “My eyes are going to go to reduce property tax because they have a sales tax, so I just want to be clear.”
Commissioner Wynn Butler says his support is strategic, adding if he has to choose he prefers to fund city government with sales tax over property tax. Butler has been adamant about keeping the mill levy to a one mill or less increase this year if they want this to be viable — especially considering the tax impact of the recent USD 383 bond issue.
“Giving this to the voters, they’re going to make the decision, we’re not. We’re just deciding to put it on the ballot,” Butler says. “But I think […] the number one thing on that education process is going to be what will be the mill levy this year — and if that goes up substantially, I don’t think this has a prayer of passing.”
Commissioner Linda Morse ran down the list of projects, saying that the body has already expressed many of these as priorities or even agreed to do with other entities. Morse says that many are needs, not wants, pointing specifically to their partnership with the university in the North Campus Corridor.
“Painful as it is, it is a partnership with K-State and NBAF — we can’t just leave things as they are up there,” says Morse. “We’re going to have endless traffic jams, we’ve got to think ahead.”
Mayor Mike Dodson says these projects will extend 30 years, and that this decision won’t necessarily mean every project will be funded tomorrow. He says the projects will be tackled in a sequence in some order of priority that makes sense to the community.
“We’re in a time now where if we stand still, we’re going to regret it in three or four years,” Dodson says. “There are a lot of economic theories out there, but the one that I advance [is]I’d rather be spiraling up and spiraling now.”
Dodson also says that adding this revenue power to the city is important to add property, people and attract businesses as well as employees to the community for a net gain in property and sales tax.
Now that the resolution has been approved, it will be published in the Manhattan Mercury in the month of June and city staff will begin engaging with the public on the topic. Manhattan will have to submit the question to Riley County Clerk Rich Vargo’s office by September 1, 2019. The election is Tuesday, November 5.
The last day to register to vote is October 15, advance and mail-in voting begins October 16 and closes on November 4 at noon.