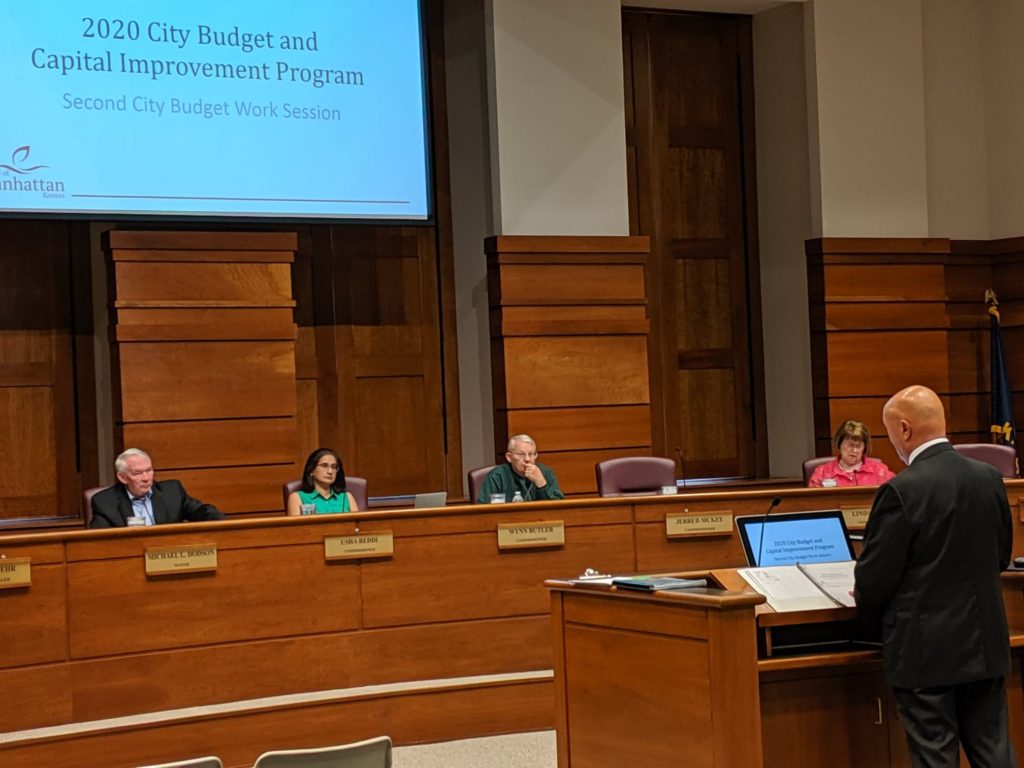 Currently, the 2020 budget is proposed to amount $164.48 million. That’s an increase by $8.54 million from 2019 — though around 80 percent of that increase is the result of additional cash balances and not tax increases. City staff worked that amount down from a $9.28 million increase presented at the first session. As it stands, Manhattan would fall about $300,000 below the state-imposed tax lid.

Breaking it down, the special revenue fund would see an $8.1 million increase to $66.76 million (largely due to money coming in from sales taxes like the recently passed special recreation sales tax or the special street and highways taxes), enterprise funds a $581,000 increase to $39.39 million, and the bond and interest fund a $600,000 decrease to $25.96 million (due to the speed at which the city is retiring debt).

Mayor Mike Dodson expressed frustration with the way the budget was presented, saying it made it difficult to go from point A to point B in tying together costs and expenditures. Additionally, he also wants city revenue and expenditures on the bond and interest fund to be projected out further than were presented — possibly to 2030. 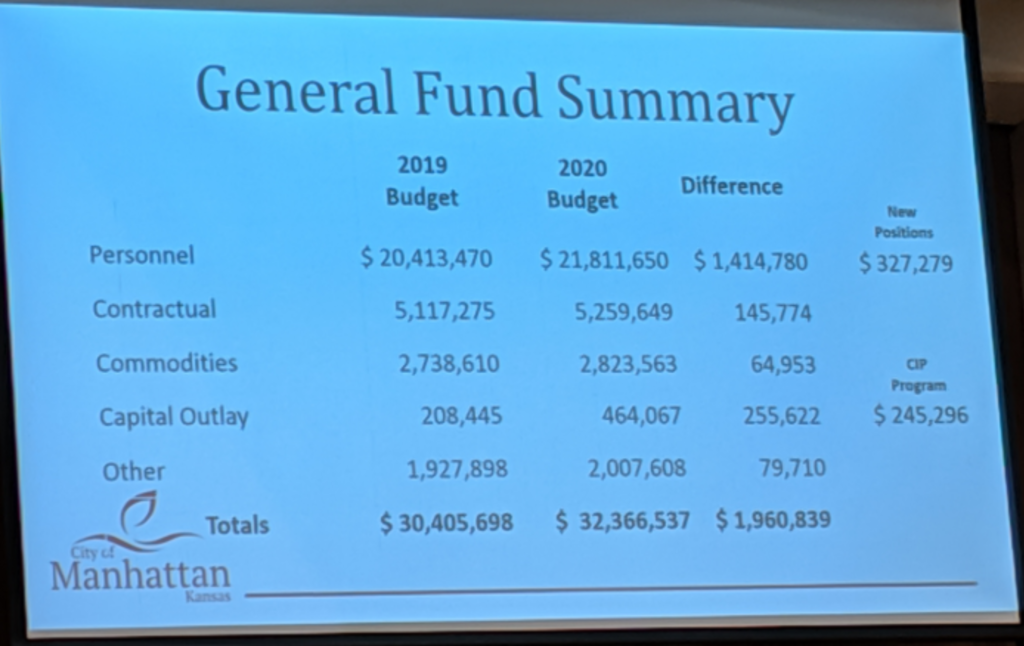 The general fund would see a $460,000 increase to $32.36 million ($1.9 million once the city removes a $1.5 million utility loan that’s not lawful under a 1989 attorney general ruling). An approximate $376,000 of that would go toward cost of living adjustments (COLA) and step raises for current staff, nearly $200,000 for other raises and promotions, and $245,000 to fund capital improvements. Additionally, the city is looking to hire nine new employees at a cost of $327,000 — though those are expected to be revenue neutral and paid by utility funds or cost reductions the hirings will afford. There were 21 hires requested.

Commissioner Linda Morse says she’s not ready to support the hires, especially if the money is coming from utility funds.

“I feel like we’re robbing that in some ways now, and so I have a concern about the future,” says Morse — adding that they just raised the rates in order to afford capital improvements at the municipal water treatment facilities. “I don’t want our utility funds to be our bank like the State of Kansas has done with KDOT and KPERS and some of their critical kinds of funds.”

Mayor Pro Tempore Usha Reddi says that while they usually base city employee cost of living adjustments and step raises to be in line with those of agencies like RCPD, their current situation necessitates they give that a second thought.

“I’m not an advocate for cutting positions,” Reddi says. “I am an advocate for sustaining what we have and maybe being a little bit more cautious about how we distribute step and COLA [raises]at this point.”

Dodson adds that administration should be very honest with them if they think reductions like that will harm their competitiveness on the market and ability to attract personnel in necessary roles.

The city has seen additional revenue of $310,000 due to market growth — new property tax revenue due to new development or renovations. Commissioner Wynn Butler raised the idea of limiting increases in personnel costs to only the amount of growth they’ve seen rather than the approximate $572,000 budgeted for COLA and step raises.

“If you’re running a household and you get a pay raise of X amount, then you spend that,” Butler says. “You don’t spend twice that — and that’s part of what our problem is.”

McKee says that that may help for one year, but called it a “band-aid” as they’ll run into the same problem every year and need a long-term solution.

Additionally, the special revenue fund would see an $8.1 million increase to $66.76 million (largely due to money coming in from sales taxes like the recently passed special recreation sales tax or the special street and highways taxes) and the bond and interest fund a $600,000 decrease to $25.96 million, and enterprise funds a $581,000 increase to $39.39 million.

If passed as is, property taxes would increase by about $2.3 million to be distributed among owners. Based on a 1.8 percent increase in tax base and an increased mill value of $585,000, that amounts to a 3.06 mill increase. Of the largest recipients of that revenue, about $643,000 of the increase would go to the general fund, $678,000 to the bond and interest fund (as principal and interest payments are projected to outpace cash balances significantly without increases in sales tax revenue to support it), $666,000 would go to special revenue funds, and $319,000 would go to outside agencies.

During the discussion of outside agencies, Butler also says that they should consider the social services they fund in addition to groups like the Manhattan Public Library and the Riley County Police Department. He proposes funding the Flint Hills Metropolitan Planning Organization and the Flint Hills Area Transportation Agency via economic development funds rather than property tax and capping social services funding to 1 mill total — amounting them yearly increases based on the increase of property value.

“Which would actually be an increase in how much money they got last year,” says Butler. “Now according to my calculations that will lower the mill levy by 0.2 and increase social services support, give ATA bus what they want and pay the MPO costs.”

Part of the city’s struggles is that revenues other than property tax has been largely flat dating back to 2016. Looking at the general fund — the city’s main operating fund — if you remove beginning cash balances and property taxes from the mix and only take into account sales tax, fund transfers as well as franchise and building fees then yearly revenue growth is only about $160,000 for that fund. That situation has caused a higher reliance on increasing utility funds and property taxes.

Commissioner Jerred McKee points to that as a key arguing point for discussing the November 0.3 percent sales tax ballot question rather than focusing the issue on funding major projects.

“Because I think that most people think that we’re just lavishly spending money when in actuality revenues have stagnated over the last five years,” says McKee. “I get scared that people will vote against those projects and not realize that — I don’t know understand how we fix that over time without cutting positions.”

Other property tax impacts in the proposed budget include the Manhattan Public Library, which would see a less than 0.15 mill increase of $107,000. The Riley County Police Department budget, already passed, features a less than 0.1 mill decrease due to carry-over cash balances.

Going forward to the next budget work session, Mayor Dodson instructed administration to tighten the budget up and bring them more clear breakdowns of costs versus expenditures. He also wants to see options on what the budget breakdown would look like and the impact on city operations at incremental mill increases of 0.5, 1, 1.5 and so on.

“Because then you can go back and say ‘what are we going to decrement to get there,’” Dodson says. “And right now there’s no prioritization, I can’t tell what is really required and what’s not. I don’t know how much pain would be exacted if we took something out.”

The next work session is scheduled for Tuesday, June 25 at 5:30 p.m. That meeting will focus on outside agency funding requests for the 2020 fiscal year. State law requires a budget to be passed by August 15.