Soldiers at Fort Riley will now be equipped with the newest night vision technology in the US Army. 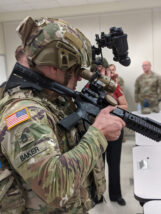 Sgt. Brian Baker checking his equipment before the demonstration

Officials at the fort held a media conference to see first hand what the new night vision goggles, known as the ENVG-B, are like. Assistant Product Manager for the ENVG-B Major John Nikiforakis says the goggles will now be able to see in a white light compared to the green usually seen on TV.

“We’ve got two tubes instead of the traditional one, most soldiers here at Fort Riley and the U.S. Army a single tube night vision device,” says Nikiforakis, “What we’re going for here is having those dual tubes make for increased mobility while maneuvering at night.”

The goggle has a battery pack placed on the back the helmet to transfer the data back to the front of the helmet where the actual goggle is located. The goggle tubes can then be opened to either use one of both and has the thermal vision capabilities to see through smoke. 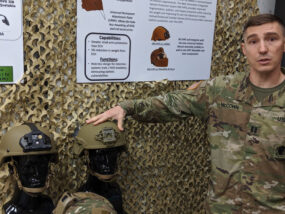 The goggles will also be part of a new helmet designed with the goggle attachment already built in.  The overall equipment is also lighter than the previous models by about three pounds.

Assistant Program Manager for PEO Soldier Erik Mayfield says the goggles can also link up to a sight on the gun.

“When they zero that optic, soldiers don’t want to take that off and re-zero it.  This always them to skip that step,” says Mayfield, “This allows a soldier to reach out to 1500 meters well past the effective range of the weapon, so that kind of increases that reconnaissance ability to give the soldiers on the ground a little more decision space.”

The rapid fire acquisition of the gun will allow soldiers to not give off a laser signature and even peak behind cover using the gun sight.

Soldiers will also be able to link the goggles to a smart phone and see their maps without having to remove them. 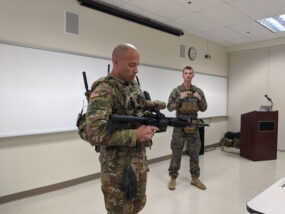 Baker and Fenley during the demonstration

Moving on from the equipment trailer, the goggles were then shown off by two soldiers who have been testing them out in the field.  First up was Sergeant First Class Brian Baker, who says they have focused their modernization efforts off the feedback of soldiers.

“We accomplish that by executing what we call soldier touch points.  That’s where we go to the force, get relevant soldiers, and incorporate them into the design process to make sure we give them a piece of equipment that they will put to use,” says Baker.

Baker says in the past they did not have soldier feedback during the process whatsoever.  His favorite feature is the built in thermal vision because in the past that was a separate piece of equipment taking up space.

Sergeant Fenley, a US Marine from Virginia, has been using these new goggles in the field for about a year now.

“One of the best parts of this system in my opinion is increased situational awareness as well as the ability to shoot while not being to see the target with my own eyes,” says Fenley, “It wirelessly links to the goggle, with that capability I can shoot around corners, I can shoot were my entire body is concealed and the only thing that is exposed to the enemy is my weapon system.” 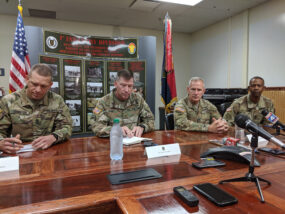 After the demonstration, multiple US Army leaders held a discussion about the goggles from their inception to implementation. One of the factors going into the design was soldier feedback. Sergeant Major of the Army Michael Grinston says it’s more than just the feedback.

“The key here is the process of having the soldier touch points and then a week later seeing improvements, not four years from now,” says Grinston, “The soldier now says this is what I would like to see and a week later they have that and it works.”

Brigadier General David Hodne says the feedback goes just beyond the mechanical aspects, but generationally as well since the younger soldiers will be the ones using this technology.

When asked about the next big powerful gadget will be, Grinston says its still the soldier themselves.

Hodne says for now it will take about a couple of months before other parts of the army will get their hands on these goggles. The will disclose a full timeline after they have briefed senior army leadership with their findings.