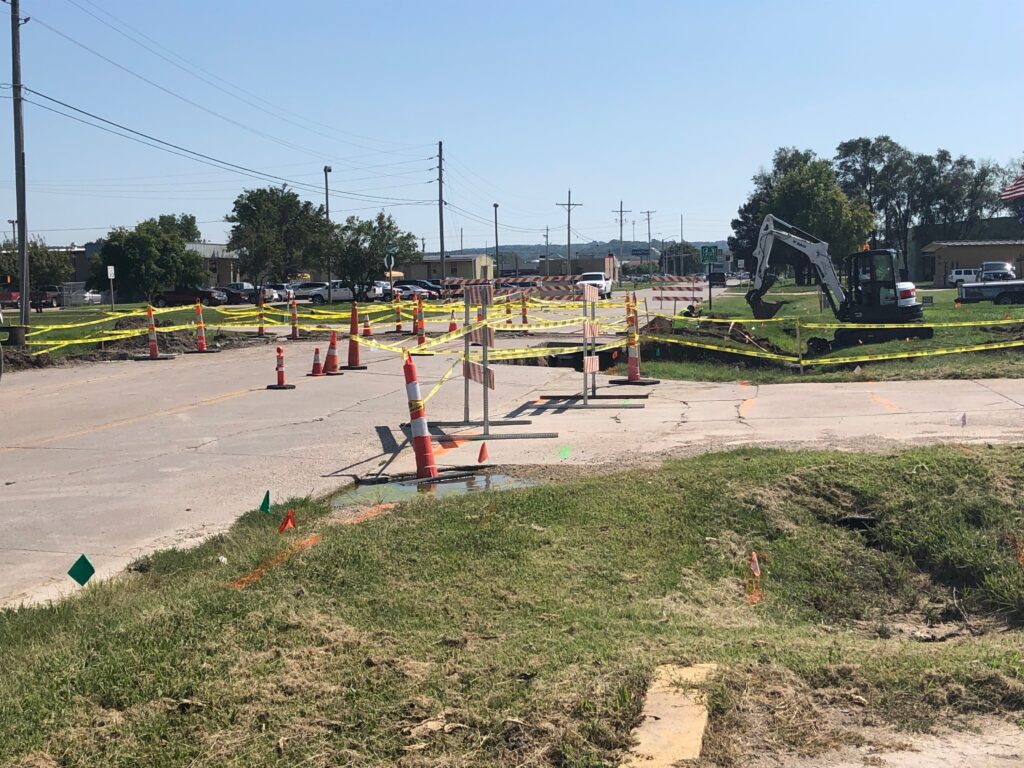 Hayes Drive is closed just south of Levee Drive after a sinkhole developed Friday morning compromising some of the roadway. (Brandon Peoples/KMAN)

Flooding continues to be a problem in Manhattan, as evidenced last Friday when 4 to 5 inches of rain fell in the early morning hours.

Hayes Drive was one of the roads affected with a sinkhole developing north of McCall Road, less than a mile north of another sinkhole south of Walmart at the Bluemont and Hayes intersection. Manhattan City Manager Ron Fehr explains what caused the sinkhole to develop.

“We had another sanitary sewer line failure and breakage, north of where Levee Drive intersects it. It undermined some of the roadway and caused a service line gas line break and a water main break that have since been repaired,” he said.

Fehr says that work has been contracted out and no timeline has been set for repairs. Hayes Drive will remain closed until further notice. Fehr adds that the city also experienced issues with a clogged storm water drain near McCall Road and Tuttle Creek Boulevard, which caused flooding down Third Street. This also affected the traffic signal at the intersection.

“Unfortunately the water got high enough that it was up halfway on the controller panel box for that signal. We were able to dry it out and get it off of flash. It is on a time sequence, but it’s not working like it normally should,” he said.

Video detection at the intersection still needs to be repaired. Fehr says Public Works are working quickly to make those repairs.

Fehr also says they had to close the levy gates at the Kansas River early Friday morning because it was starting to reach near flood stage. He added future fluctuation of the river and groundwater could potentially create future sinkholes in that area.

Tuesday marked the one year anniversary of a devastating flood of Wildcat Creek in Manhattan and Riley County due to heavy rainfall.

The flood affected homes and businesses around the Village Plaza area, as well as homes east of Manhattan in Riley County after roughly 9 inches fell in a short period of time. Damage was estimated at around $18.5 million in the city and county. While the city has made improvements since then, there is still a lot of work to be done. Fehr spoke to KMAN Tuesday about some of the improvements made in the last year. 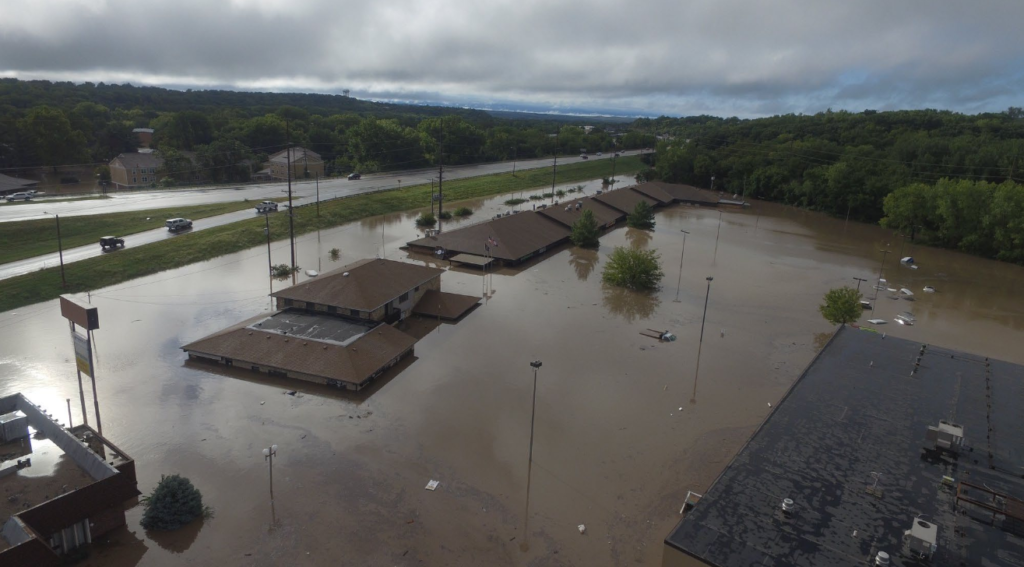 Multiple buildings in Plaza West were inundated during 2018’s flash flooding incident, which resulted in around 7 feet filling 3003 Anderson. (Courtesy of the City of Manhattan)

“Some additional studies and analysis on the water shed. We’ve looked at a couple of different aspects since then of detention structures that could be constructed all around the watershed and how the improvements might make the situation better,” he said.

This will help reduce runoffs during peak times of severe rain storms, which was attributed to most of the flooding last year. Fehr says they have also worked on educating the community and those who are coming into the Manhattan area.

“We’ve had some drills since then, some areas where the flooding didn’t get near as bad. That was one of the most significant events that we’ve had on the water shed,” he said.

Since Labor Day 2018, the City of Manhattan has been working to make sure they can minimize the flooding around the area. A resiliency committee has been formed, studies have been done, community education, and a flapper gate installed by KDOT.

Mayor Mike Dodson says they have had a study that identifies areas on Fort Riley and Highway 24 to minimize flooding.

“They basically do in-depth modeling which allows you to see the impact of each one of those combinations to reduce the flood coming down. So at peak times it pulls it down by about 30 percent, which makes quite an impact to the bottom end,” he said.

Going forward, Dodson says they will continue to work with Fort Riley and Riley County to see if they want to add detention onto their retention ponds.