Notice of potential noise impact from Fort Riley training on properties could soon be put in property title work in cities around Riley County including the western fringes of Manhattan.
City administrative staff says the goal of the notice is to keep potential property buyers informed of the probability of noise without completely relying on seller or realtor disclosure, provide non-mandatory noise attenuation building recommendations and reducing urban encroachment on Fort Riley as cities in Riley County expand.
Manhattan City Commissioners supported the idea — but cast no votes — at their Tuesday work session. The city has included notices in building permits and plats since 2015.
“It just recognizes the facts as they are,” says Commissioner Wynn Butler. 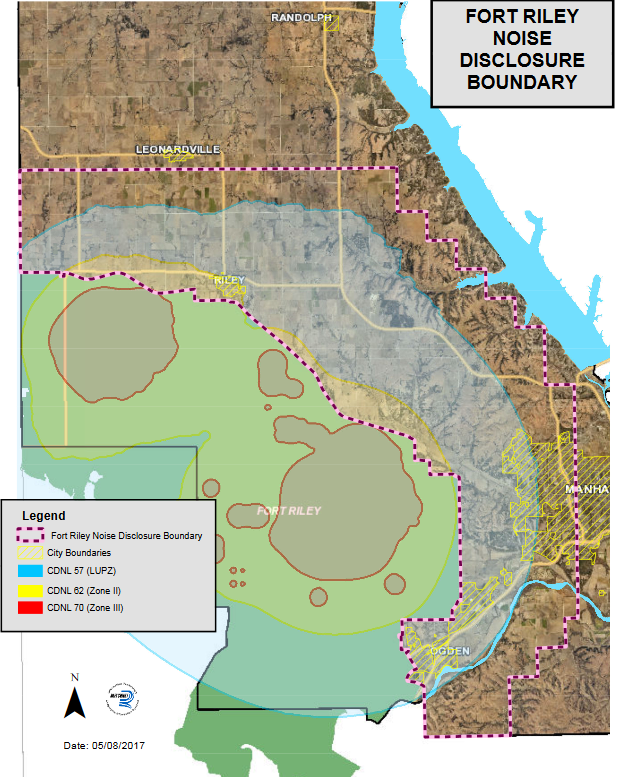 The recommendations came as a result of a grant-funded 2017 joint land use study initiated by the Flint Hills Regional Council, an update to studies dating back to 2005. Since that study, the area of expected impact — known as the land use planning zone or LUPZ, where during training residents can expect to hear noise level averages of “less than 62 dB but greater than 57 dB CDNL” during a 24-hour period — has drifted a mile eastward, a result of better sound modeling and new training techniques at the post.
“They added a second multi-purpose range after 2005,” says Community Development Director Eric Cattell. “They’re doing joint training with weaponry on the ground as well as aircraft so all that has changed the noise models over time.”
Acknowledging that sound can and does extend further than a set computer modeled boundary, properties even further east of that line would have notices added to deeds according to Cattell. The study also identifies two zones closer to the post where land use is recommended to be limited to non-residential purposes. Much of Riley and Keats fall in zone II.
“We want Fort Riley to continue training and practicing, we are very good partners with Fort Riley,” says Mayor Pro Tempore Usha Reddi. I think this gives a good communication piece to the residents in those areas.” 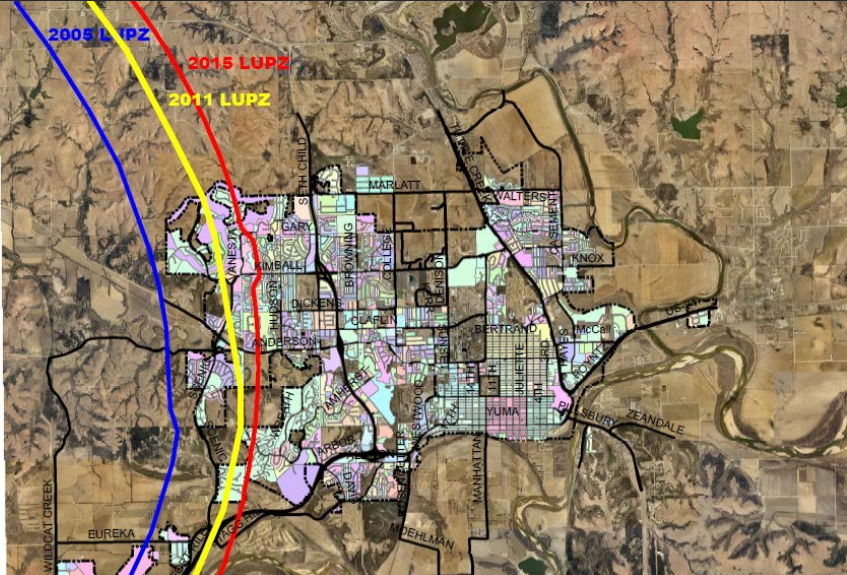 Those in the LUPZ are pointed to A-level attenuation recommendations, while those in zone II are recommended higher B-level noise reduction strategies. Recommendations can be found online, but some features include utilizing sound walls, sound flanking by sealing gaps with noise canceling seals and orienting construction so flat walls do not face the post.
“I think this notification is terribly important so that people have a heads-up as they are considering prospective purchases of homes,” says Commissioner Linda Morse.
Cattell says while there is no way to fully mute noise levels, especially for the low-frequency noise resulting from artillery, attenuation will help with some of the other frequency ranges.
“Just like airports that get shut down from noise complaints, that’s the whole purpose behind this,” says Cattell. “To try and reduce the level of complaint — and I’m not implying that Fort Riley has a lot of noise complaints.”
Resident Lynn Thomas spoke during public comment, saying the Army isn’t doing its part, leaving noise mitigation to surrounding cities and counties.
“The Army wants no responsibility to be a partner in reducing the noise,” Thomas says. “They just want open season and the ability to do whatever they want and have you put this in the deed.”
Mayor Mike Dodson is a retired lieutenant general, he says Fort Riley has utilized smaller caliber and training rounds. He mentioned that at Fort Sill in Oklahoma, close proximity of housing to firing ranges resulted in the Army “essentially abandoning those firing points.
“You’ll never get that back,” says Dodson. “Had we had a noise study, we probably would have been far better off down there.”
Dodson also says the post has been more proactive at informing civilian communities of planned training exercises, which Commissioner Jerred McKee echoed. He also compared their situation with that of Virginia Beach. He says there the city gets little information about what is taking place and high levels of noise from nearby installations are common place.
“Virginia Beach has a couple more [installations]than we do that they would have to coordinate with,” McKee says. “But nonetheless, I think at least the communications patterns of it I always get several emails in my commission email as well as my personal email and I always know when Fort Riley is going to be doing training, when I should look out for those things.”
McKee’s only concern was how current property owners would be notified as the notices were more geared toward notifying those considering purchasing a property rather than those who already own them.
If approve by Manhattan and other nearby cities, the Riley County register of deeds could file the notices after November.