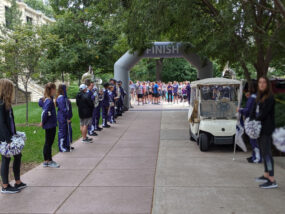 Runners from all age groups showed their support for Shepherds Crossing on Saturday with the 8th annual C. Clyde Run.

Taking place at the K-State Student Union’s Bosco Plaza, hundreds of runners and walkers gathered to show their support.  Coordinator and Assistant to the Dean of the College of Business Melanie Horton says they usually average around 300 runners for the event, but saw around 350 this year.

“We have runners from all ages, 80s to babies in strollers.  It’s a real family event,” says Horton.

Horton says they have averaged around $20,000 each year for Shepherd’s Crossing. However, this year they were actually able to raise close to $25,000.

“Really great to come in this time of year, right before we start the winter and holiday months to give them an infusion of cash they really need,” says Horton, “But we are thrilled as the College of Business and our students, that we get to come out here to help the community and do something really great we can all take pride in.” 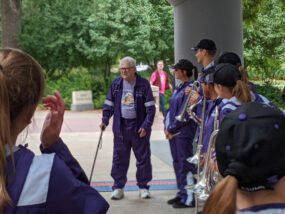 C. Clyde Jones himself thanking the band for coming out

Horton says those who have participated in multiple years have love to collect the shirts since they have different colors every year.  They also love to come give their support to Jones, who Horton says is so much the heart of Manhattan.  She added the the run gives the College of Business students a chance to meet with the legend himself.

One of the runners was Keith Eyestone, who says one the reasons he takes part in the run is to show support Jones, who goes to the same church as him, and for Shepherd’s Crossing.  He has participated in the last five years and comes rain or shine. 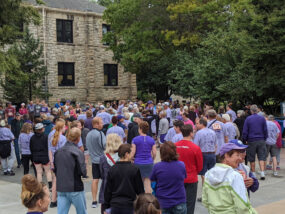 Another one of the runners was Jeff Ward who participated in his second run and says he wants to support a good friend.

“It’s good to get the community out to support such a cause as Shepherd’s Crossing,” says Ward.

When asked what his favorite part of the event was, Ward jokingly said the finish line. 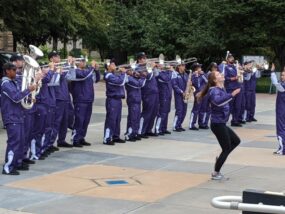 The K-State Marching Band also showed up to show their support for the runners.  They played before the race to get the crowd energized then played as the race began to cheer them on.

Shepherd’s Crossing is a community clearing house for people in need in Riley and Geary counties. They help them get in contact with the social services they need and also help with finances.