Update: Victims in stable condition after Wednesday crash near Wamego

Home/Local News/Update: Victims in stable condition after Wednesday crash near Wamego
Previous Next

Update: Victims in stable condition after Wednesday crash near Wamego 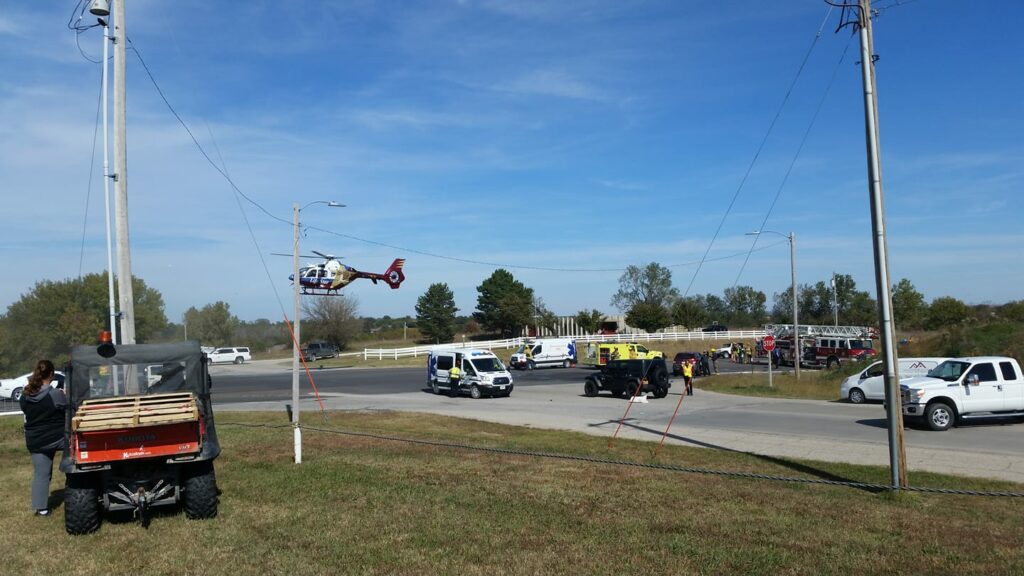 One person had to be air lifted following a two-vehicle crash west of Wamego Wednesday. (Photo courtesy Shannon Fritz/Wamego Times)

The victims in Wednesday’s injury crash that shut down a portion of Hwy 24 near Wamego have been identified.

Pottawatomie County Undersheriff Shane Jager tells KMAN that 79-year-old Joyce Martin, who was driving the vehicle that was struck, is in stable condition at a Topeka hospital after being life-flighted from the scene. A passenger, 70-year-old Sonja Pederson of Wamego was transported by ambulance to Ascencion Via Christi and is said to be doing well. Both had to be extricated after their car was struck on the west edge of Wameog just after 1 p.m. Wednesday. Martin, who was westbound was attempting to turn south onto Columbian Road when it was struck by an eastbound vehicle.

The driver of the other car, 19-year-old Ethan Chehe of Manhattan was treated and released at the scene.

Jager says neither driver has been cited. The crash remains under investigation.

A stretch of U.S. 24 was closed for about an hour Wednesday afternoon following a two-vehicle crash near Columbian Road, west of Wamego.

Pottawatomie County Undersheriff Shane Jager tells KMAN it happened after an eastbound vehicle on Hwy 24 struck a westbound vehicle attempting a southbound turn onto Columbian Road near the sports complex. Two people in the vehicle that was struck had to be extricated. One person was transported by ambulance to an area hospital. Another was transported by Life Star helicopter.

The driver of the other vehicle was treated at the scene. Authorities have not released their names, nor extent of the injuries.